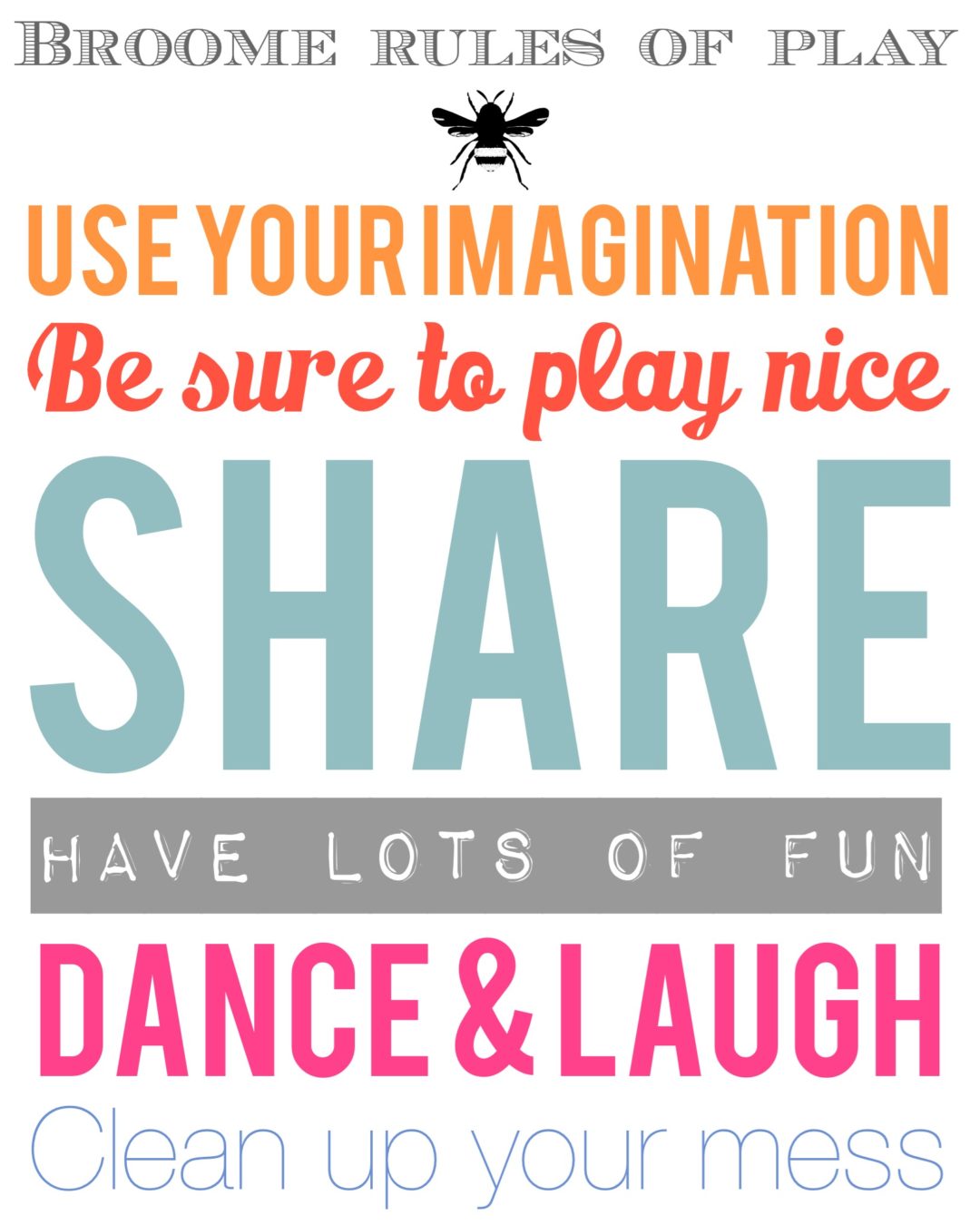 Here’s the before and after view from the kitchen (which means I can spy on them when needed!). We had to insulate the walls and the floor as this was a single brick addition. 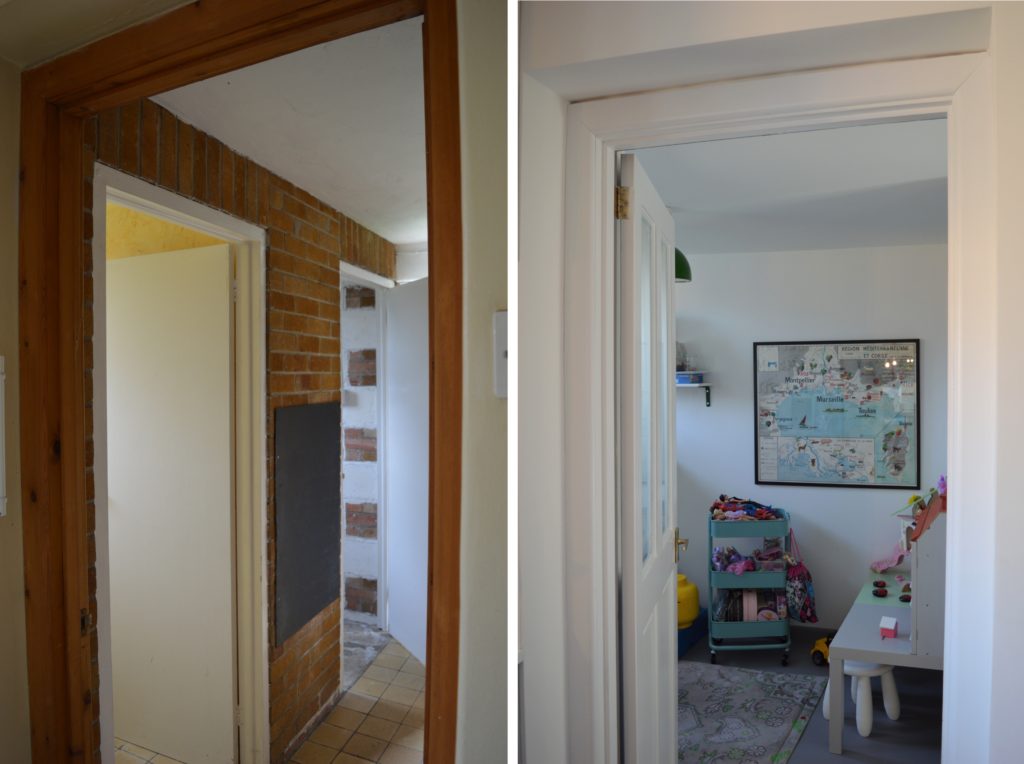 I painted the walls white as the toys are so colourful and it’s a lot easier to touch up when it gets knocked. I colour matched the plain grey vinyl floor and painted all the woodwork to match. Here are some photos from when it only had the desk in there. 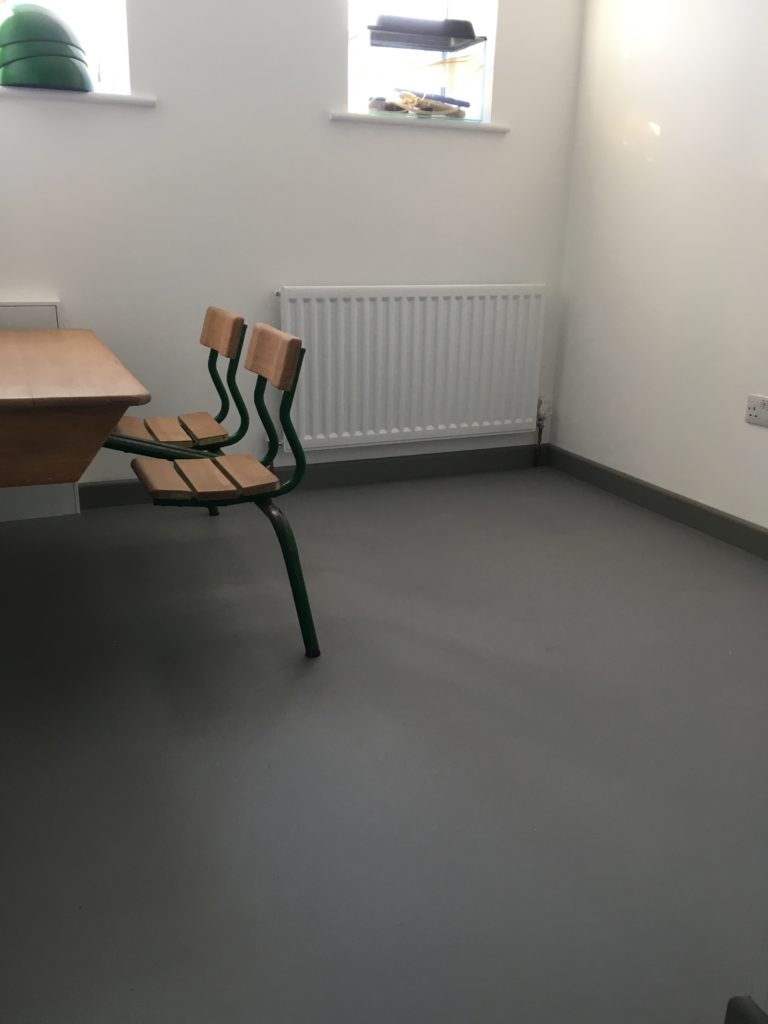 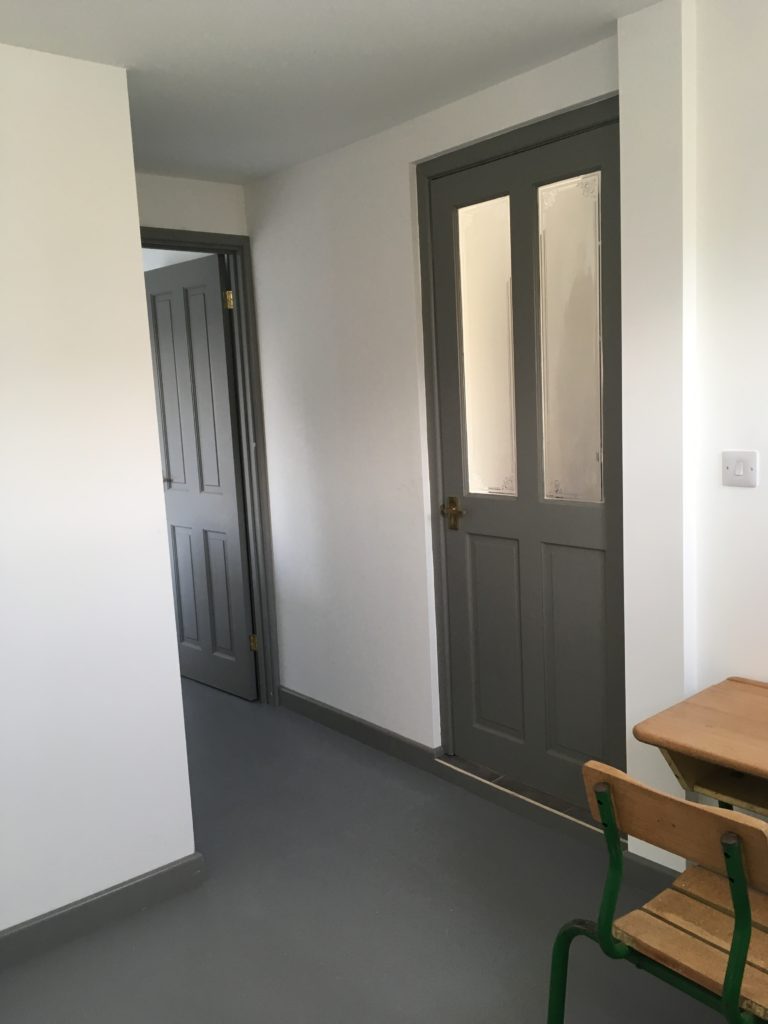 The lamp shade is an original enamel pendant from the 1950s bought on eBay as a set of 3 (perfect as the playroom, downstairs loo and utility are all connected so they each got one!). 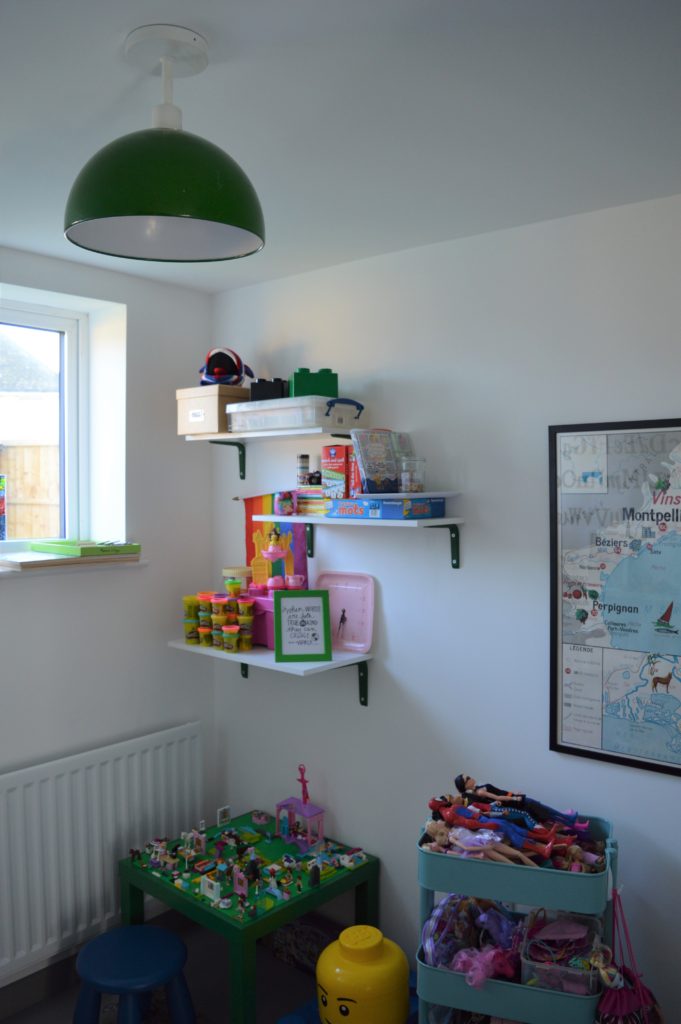 There’s a bit of a green theme so I spray painted the cheap shelf brackets green too. Obviously in a playroom most items should be in reach of the kids so they can play independently, but some things like PlayDoh (I hate the stuff), is best out of reach so it’s use can be supervised! 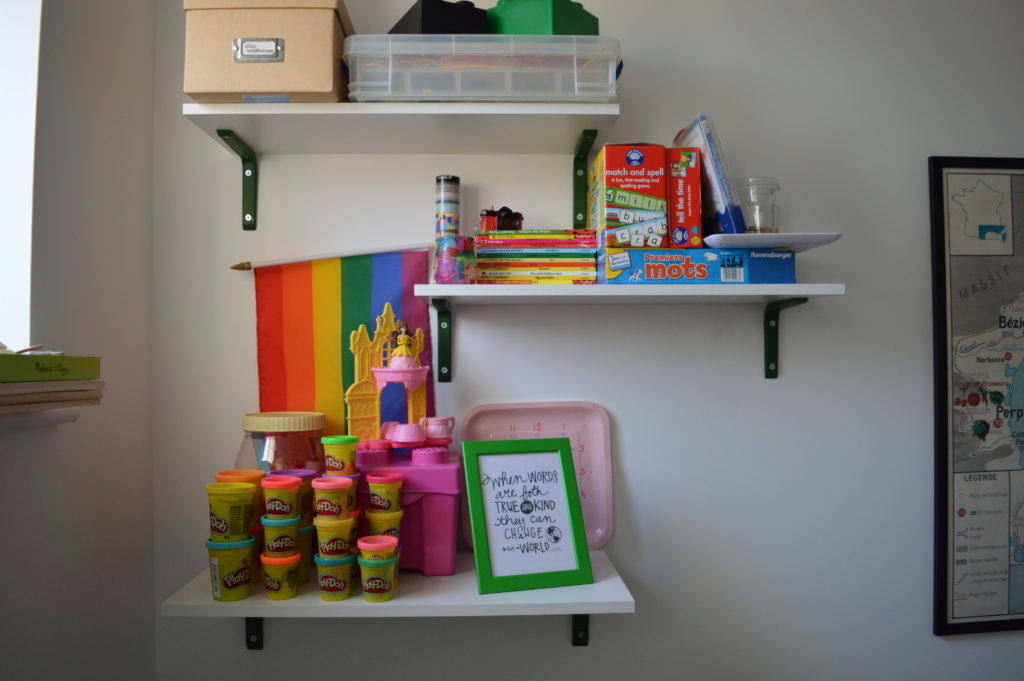 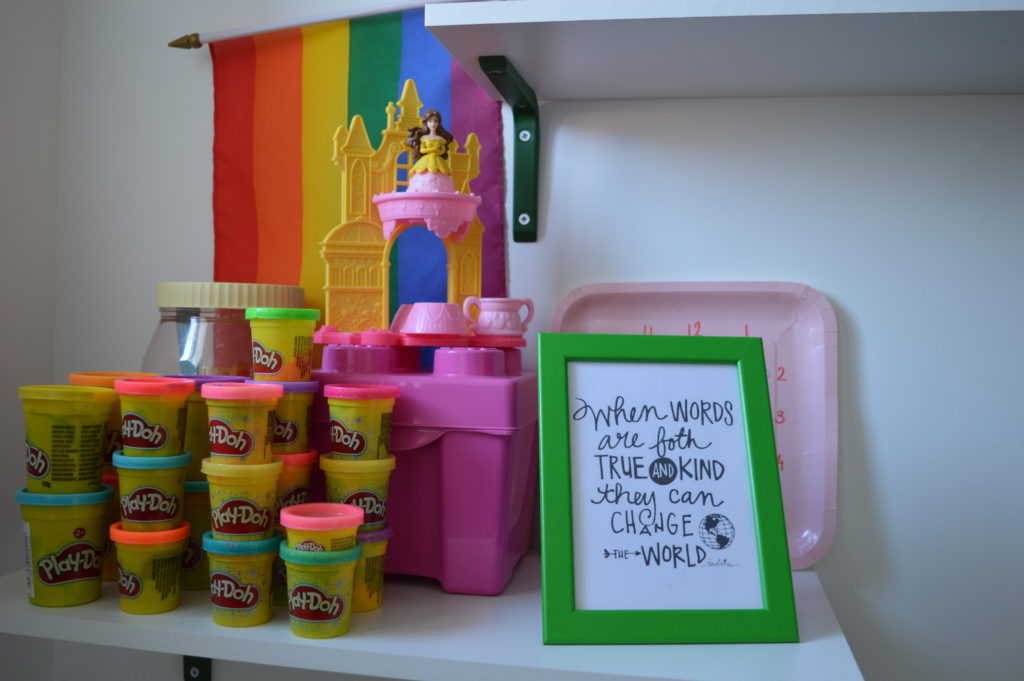 The ABC stickers are from the IKEA KLATTA wall sticker set. My eldest is learning how to read and write at the moment and really wanted an ABC on the wall. The IKEA picture ledge was left over from a job but it’s the perfect place to display crafts and their latest art piece in their front opening frames. 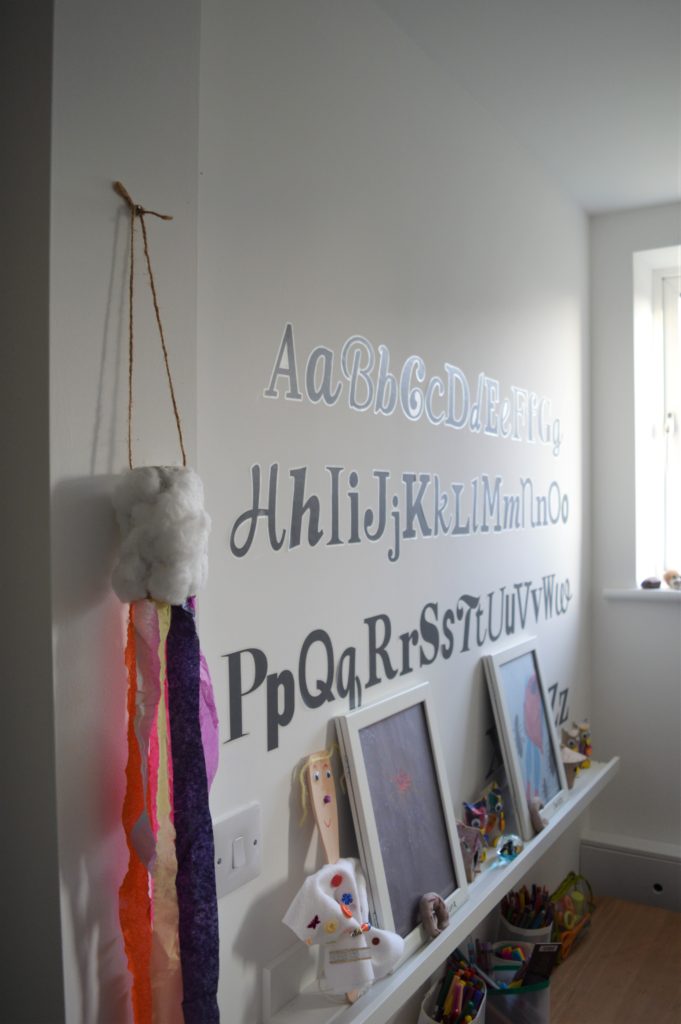 When I found this old French school desk on eBay I fell in love. And my husband drove more miles than I would like to confess to, to pick it up for me. (And that’s one of the reasons I fell in love with him!) 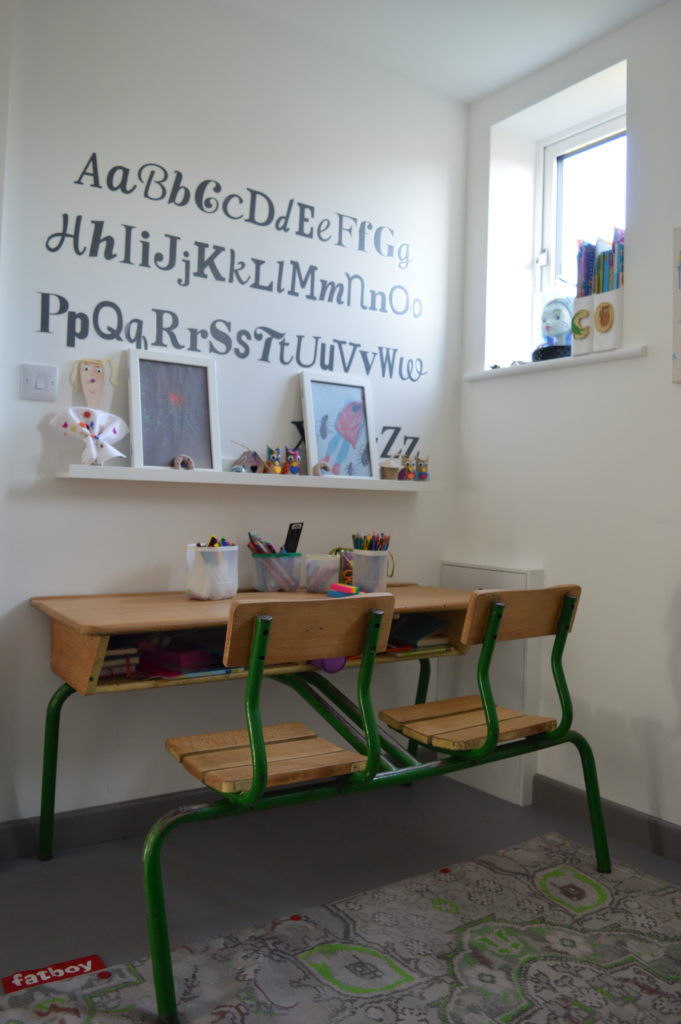 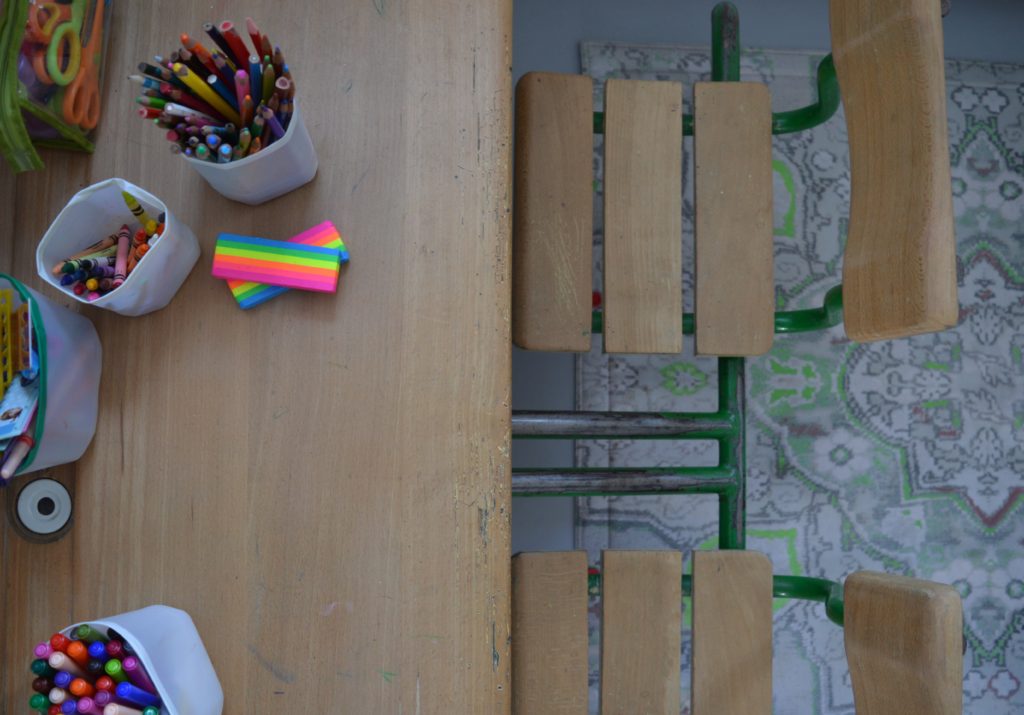 Lego is a firm favourite with my girls and as my eldest is called Olivia – like one of the Lego Friends characters – she has quite a collection. I made this Lego table with an IKEA LACK coffee table and 4 Lego base plates and it is an ever evolving world. 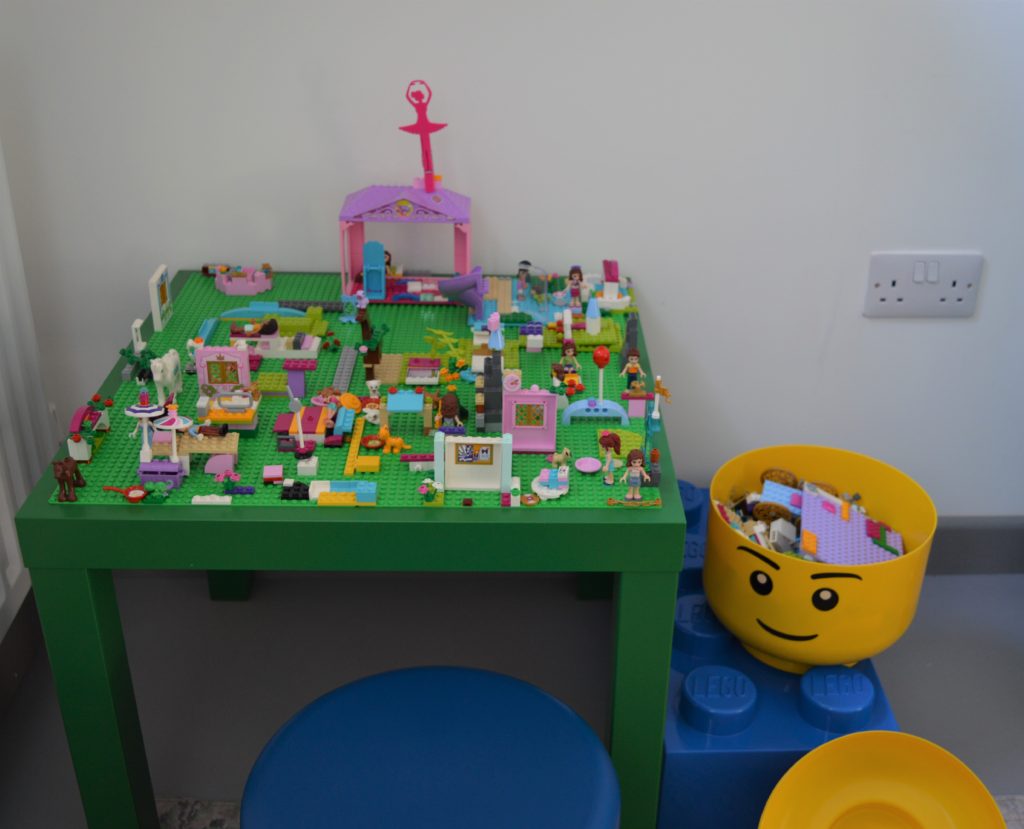 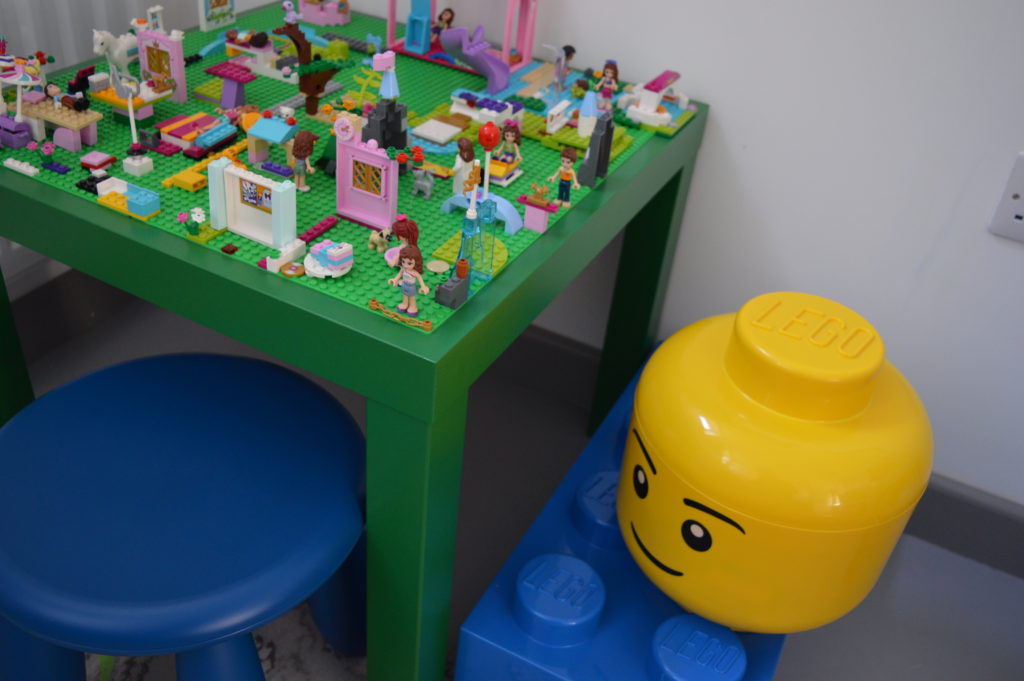 As you can see the army of Olivias have quite a world set up for them here! 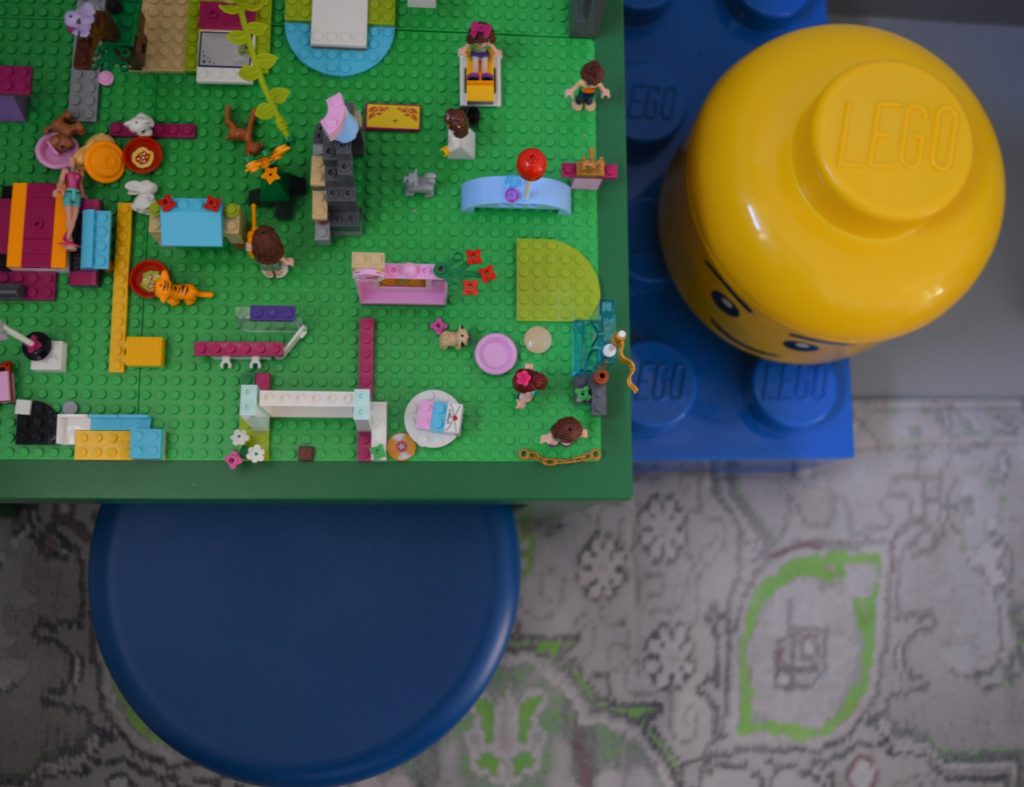 I made this play (in Arabic) canvas for the girls’ playroom in Dubai and I love that they have a taste of the country they were born in to look up at.

The dolls house was another eBay purchase and as I can’t resist a house flip, I then ‘renovated’ it. And like all good homes, the girls’ have made it their own by adding flowers, ladybirds and some home made furniture. Top tip: vinyl flooring samples make the best doll house rugs apparently! 😉 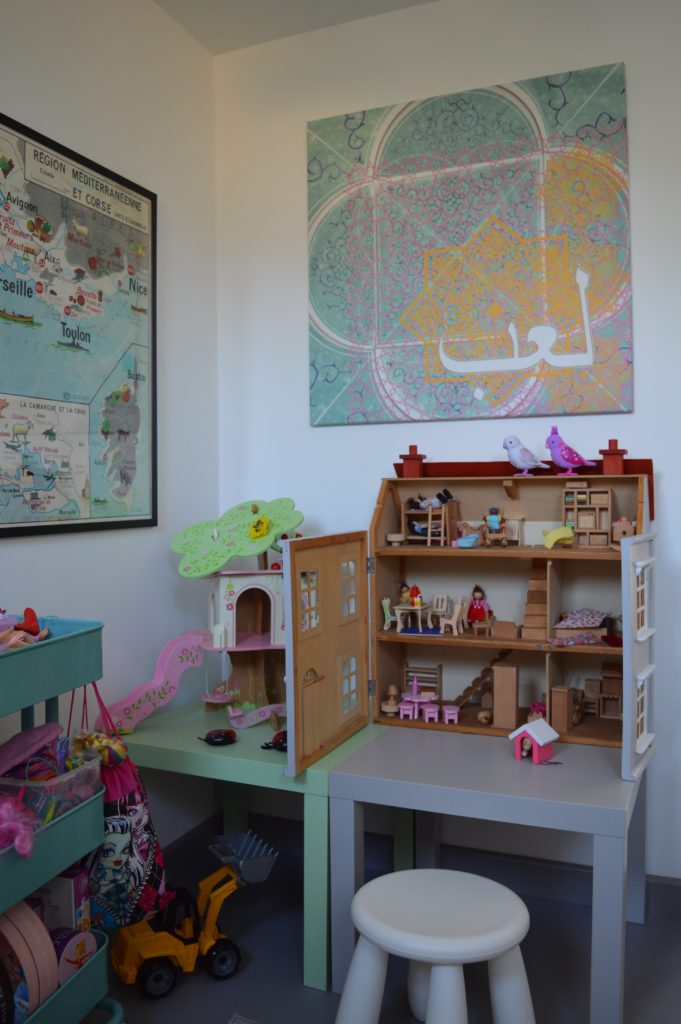 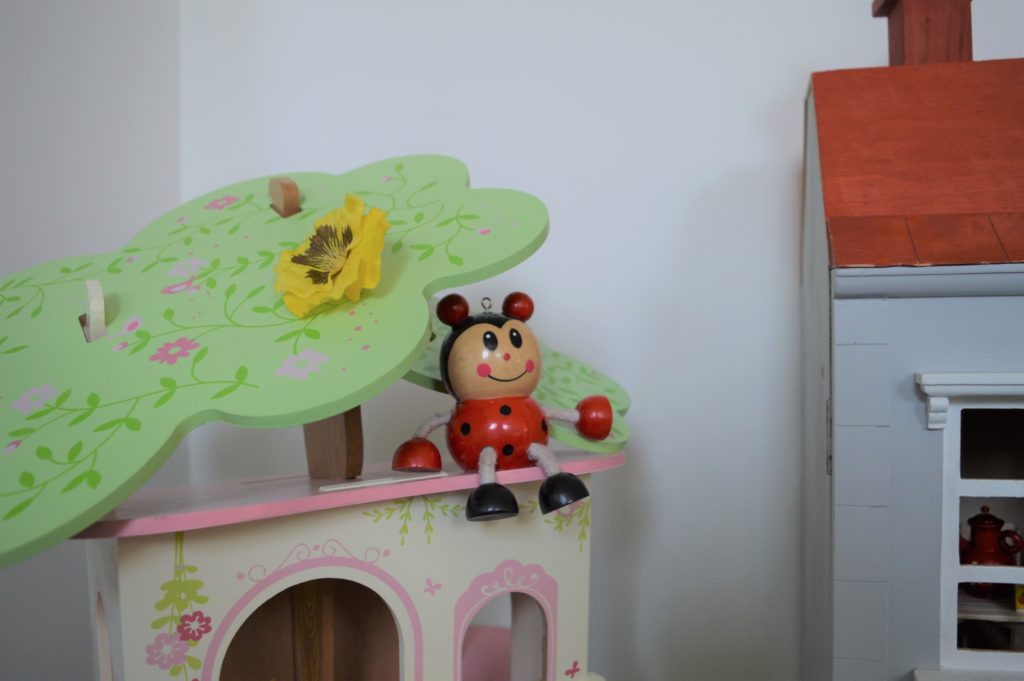 This old French school map is another eBay find. This is the area of France I grew up in but also where nearly half of our family live now. It’s a great talking point with the girls. 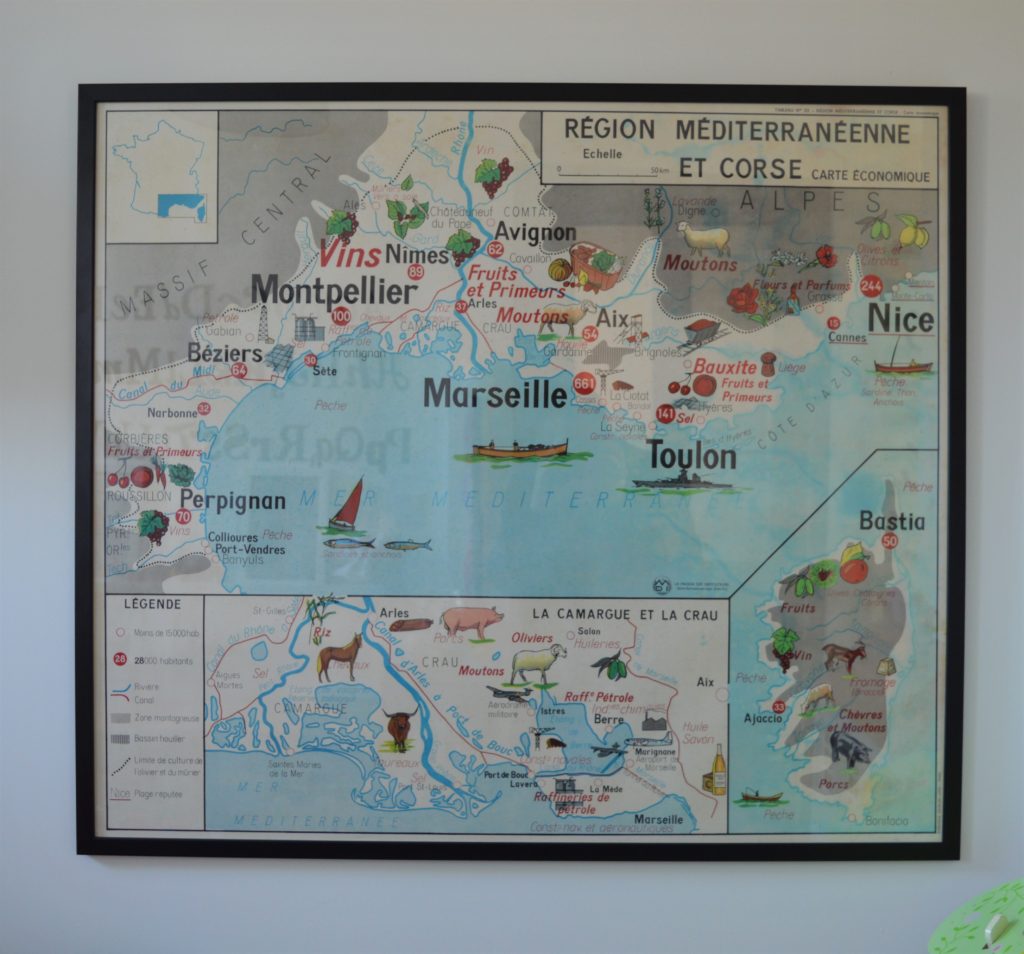 When we bought our home No 1a, there was quite a considerable shed in the garden. The initial shed had received at some stage, not […]

Since our youngest was 6 months old, our daughters have shared a bedroom. This is a conscious choice. It has had it challenges at time […]

When we lived in Canada we really discovered and fell in love with deck living. It’s been on the house to do list since we […]